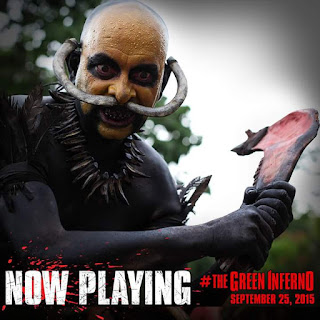 Back in the late 1970's/early 1980's cannibal movies from Italy became really popular among horror fans.  The most famous of them all is Cannibal Holocaust which is considered the greatest of the genre.  I have watched a couple cannibal movies over the years and the cannibal plot never connected with me.  When director Eli Roth decided he wanted to bring back the cannibal movie, I became intrigued.  I loved Eli Roth's Hostel and have enjoyed other films he has done or been apart of.  I even decided to finally watch Cannibal Holocaust, which was better than expected, but nothing I'd watch more than once.

The Green Inferno took some time getting to the big screen and after a couple delays it was unleashed this past September.  A quick plot description would be:  A group of college students go down to the Amazon to save the rain forest and before they know it, they are captured by a tribe of cannibals.  While the movie has an underlying message about the current state of activism by today's youth, the reality is I only care about the thrills, gore and whether I liked it or not.

I have found it interesting that this movie received such mixed reviews from horror fans.  What I have discovered is the reasons I like this movie is the same reason some horror fans do not.  To start, The Green Inferno is not as gory as anticipated.  I was expecting this movie to push gore boundaries and to be the goriest movie I had ever seen, but it wasn't at all.  Don't get me wrong, there are some gross scenes to watch, but I would say the Saw movies and even Roth's Hostel were gorier than this.  Also, the movie doesn't feel like a horror movie, it actually feels more like an action film.  I would say this is more of an escape story than a cannibal story.  Finally, I really enjoyed the fact that Roth used a real Peruvian tribe to play the cannibals.  The people of this tribe had never even seen a movie before and Eli still got some great performances from them that made the movie really work.

So, while some horror fans may not feel The Green Inferno is worthy to the cannibal genre, I would argue the movie is actually an action film that just happens to have cannibals in it.  It also has some great action, disgusting gore and it looks really good because it was shot on location in the Amazon.  It is my opinion that The Green Inferno was worth the wait.

Posted by VariousCrap at 2:18 PM