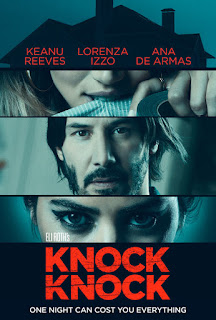 It had been eight years since Eli Roth directed a movie and this year we got not just one movie from him, but two.  A month ago we got the cannibal movie The Green Inferno (review here) and now we get Knock Knock.  Knock Knock tells the story of a husband and father who is alone for the weekend to catch up on work while his wife and kids are away at the beach.  His first night alone, two stranded young women show up at his doorstep looking for help.  What starts off as a kind gesture turns into seduction and then vicious game of mayhem.

Knock Knock is a remake of the movie Death Game (1977) which I have not seen; so I do not know how faithful it is that movie.  On its own, Knock Knock is an enjoyable movie that has some solid moments.  It is interesting to watch Keanu Reeves in this film because he doesn't usually play a character like this.  I'm so used to seeing Reeves play the hero or the tough guy, that it felt odd to see him play a character that is not only morally irresponsible, but also weak.  Reeves has never been a good actor, but he does the best job he can in this movie.  The strength of Knock Knock comes from the two female villains played by Lorenza Izzo and Ana de Armas.  Not only are they incredibly gorgeous in the movie, their chemistry together is really good.  As they torment this man whose life they changed forever, it really feels like they are enjoying every minute of it.

The movie does has it flaws though.  It seems to give the message that every husband out there would cheat on their wives in similar circumstances because we are nothing but animals and that is just a ridiculous message to portray.  Also, there are numerous times in the movie that Reeves character could have gotten the upper hand on the girls but doesn't.  At one point in the movie I'm yelling at the screen, "JUST THROW A LEFT HOOK!".  I have a couple other complaints, but their are pretty minor.

Knock Knock is in select theaters and available on Video On Demand.  I have to mention that it is great to have Eli Roth back behind the camera because I dig his style of movies.  I just wish he'd finally give us the Thanksgiving movie we have been waiting for since 2007.