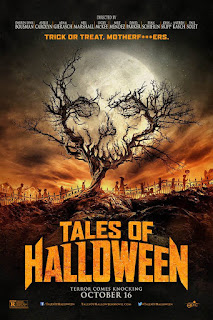 Tales of Halloween is a horror movie that is currently in select theaters across the country and available via Video On Demand.  The film is a horror anthology that consists of 10 interlocking segments.  Tales of Halloween tries to achieve two major goals and those are becoming a must watch movie for the Halloween season and to follow in the tradition of horror anthology movies like Creepshow and Tales from the Darkside.   While the movie does have some enjoyable moments, overall it is a disappointment.

I think the biggest issue this movie has is that there are too many segments.  The entire movie is an hour and a half long which makes each segment roughly 11-12 minutes.  In my opinion, 11-12 minute segments are just too short to be done effectively.  This for a movie, not something you are just going to post on YouTube.  I'd much rather them take a handful of the stronger stories and work with those than what they did here.

If you want a breakdown of each segments plot, check out their Wikipedia page, I'm just going to focus on the few I liked:

The Ransom of Rusty Rex

It is Halloween night and a father (John Landis) sends his son out to go trick or treating.  His son is kidnapped by two guys hoping to ransom the boy for money.  This backfires when it turns out the boy is actually a demon who attaches himself to people and won't leave them alone until he wants to.  There is some good laughs in this one.

It is Halloween night and a man carves his pumpkin only to have it eat him.  The pumpkin then goes throughout the neighborhood eating the people it can catch.  A detective on the case discovers this is a special organic pumpkin and she realizes she must stop this killer pumpkin and discover if there are more of them out there.  This is another one with some good laughs in it.  The pumpkin eating people is pretty funny.

Again, it is Halloween night a mutated serial killer that looks like Jason Voorhees with his mask on is killing people he finds on the street only to be interrupted by an alien spaceship.  From the spaceship comes a cute little alien who wants to trick or treat, but the killer doesn't have any candy to give him.  Immediately the killer goes from the hunter to the hunted.  This one was enjoyable for the little alien creature who is adorable.

Posted by VariousCrap at 2:35 PM