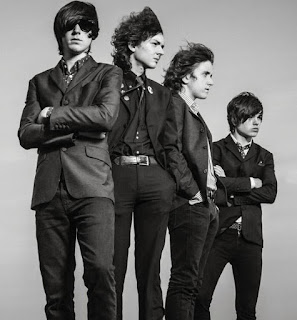 Believe it or not, I started this list in January, then got distracted and didn't finish it until now.  Yup, it has been that type of month.  I guess it wasn't a total waste as I got really listen to every album I bought 2015 which is always beneficial when making a list like this.  While the music that you can listen to on popular radio sucks beyond belief, the Internet gives us the chance to find all the great music that is released on smaller labels, independent labels and/or oversees.  As I re-listened to all the albums I bought this past year I was happy to come to the conclusion that it was a really good year for music.  So here is my Top 10 Albums of 2015:

Back in the early 2000's, I discovered the excellent power pop band Rooney of which Taylor Locke was the lead guitarist.  Several years ago that band went on hiatus and the band members have done their own projects.  The best of these projects has come from Taylor Locke.  His latest album is a solo album in which he brings his British invasion inspired power pop and demonstrates his ability to be a master of melody.  A part of me will always hope that Rooney will put out another album, but as long as Taylor Locke keeps putting out albums, I'll be happy.

When it comes to the popular hard rock scene over the last 15 years, one of the most successful bands has been Shinedown.  What has made their consistency impressive is that fact that except for two band members, the rest of the band has constantly changed.  Usually bands that switch up their line-up constantly can't maintain quality output, but these guys do.  While this album is a bit more radio friendly than what they released when they first started, the songs are still catchy as hell.

If you and I have ever talked music or you've ever seen me wear a shirt, you will know that Butch Walker is my favorite singer-songwriter.  As far as I'm concerned, there is nothing Butch can do wrong when it comes to his music.  That said, this was his first solo album that took me repeat listens to to really appreciate.  Butch is usually a guy who puts out albums filled with great rock hooks, but for this album, it is a more mellow and somber album.  This is an album he wrote after his father died and his emotional state at the time is prevalent throughout the album.  The more I listened to this album, the more I grew to love it.  What I love the most about this album are the lyrics.  Butch has always been great with lyrics and on this album, he really shined.

The Darkness is a band that I just find to be a ton of fun.  Their Slade meets Queen style is a mix of two bands that I just love.  This is their second album since they reunited and this English band nails it with solid guitar work, choruses that get stuck in your head and Hawkins falsetto vocals that can break glass.  This is a throwback band that would fit into the early 70's glam era and would shine during that time.

Ever since Fall Out Boy got back together they have been putting out what I call dance rock.  So far they are two for two as far as I'm concerned.  Yes, teenage girls love this stuff, but it doesn't change the fact that it is super catchy.  Name one other band that can get away with sampling Motley Crue in one song, The Munster's Theme Song in another and make it work.  They are the only ones who can get away with this.  Oh, and my favorite song on the album just so happens to be produced by Butch Walker.

The legendary Nikki Sixx always tweets about new bands he discovers that he thinks people should check out.  Last year Nikki recommended The Struts album and that became my favorite album of 2014; so this year when he recommended some bands, I checked them out.  The one I really connected with was the Biters who are a great 70's/80's style rock band out of Atlanta.  When I listen to this album, I can just imagine the Biters opening for Aerosmith circa 1978 and the crowd going nuts.  They got the look and the sound.

One of the biggest rock bands from Sweden since the late 90's is Backyard Babies and these guys are big over there for good reason...they kick ass.  These guys took a hiatus for the last five years to do solo projects and they not only returned, but they returned strong.  Listening to this album, you can just tell that they came back with a renewed energy to rock.  There are some great songs and attitude on the album and the song below uses the cowbell in a way that would make Christopher Walken's Bruce Dickinson proud.

Bryan Adams has been playing guitar till his fingers bled since the summer of 1969 and I have been a fan since the 80's.  His last several albums have missed the mark for me, but this album is just a great comeback.  So what did Adams do to create such a great album?  He teamed up with his longtime song co-writer and then had ELO's Jeff Lynne produce the album.  This album is heavily influenced by Lynne and he makes the good songs even better.  I really hope Lynne produces whatever Adams does next because they make a great team.

There once was a time I loved Entertainment Weekly and could relate to almost everything in the magazine.  Now, I flip through pages and then throw it in the recycling.  It is probably because I am getting old; however every once in awhile, something catches my eye.  For whatever reason, one week this year Entertainment Weekly had a small blurb about The Bohicas which caught my attention.  I went directly to YouTube, listened to some of their songs and I was instantly hooked.  The Bohicas are a great band from England whose style fits in the garage rock category of bands like The Strokes, but I think The Bohicas are better due to their superior harmonies.

The Strypes debut album came out in the US last year and that is when I discovered them.  This band's debut album had a bluesy rock feel to it that was impressive enough to make by Top 10 for 2014.  Despite their young age (they are all teenagers), critics were saying these guys had the soul of band much older due to their style.  With this album the band went more to the garage rock style and in doing so, they made a superior album.  The songs still have groove and a lot of feel, but they sound more current and fresh.  I love the fact that The Strypes are branching out to discover who they are rather than just trying to duplicate their debut album.  If Little Victories is any indication of where this band is going, it is going to be a kick ass journey.


The Best of the Rest:


Posted by VariousCrap at 8:23 AM No comments: