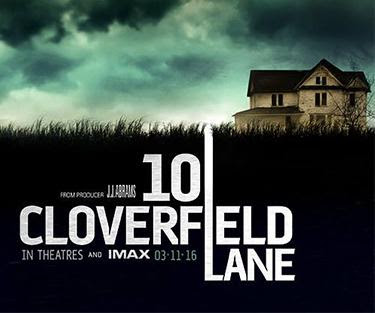 In 2008, JJ Abrams produced the surprise hit Cloverfield which was basically a found footage monster movie.  If the movie didn't make you want to throw-up from all the shaky camera movement, you probably enjoyed it.  Eight years later, Abrams produces a movie that is its own film, but it is slightly related to Cloverfield.  If you didn't like Cloverfield, don't let that stop you from seeing this movie because it stands on its own and it is much better than the 2008 hit.

10 Cloverfield Lane tells the story of a conspiracy theorist who has built an underground bunker to protect himself from the end of the world.  Whether the end of the world comes from terrorists, nuclear war, aliens or a Trump presidency, he is ready to survive whatever may come.  After a series of events, we find this survivalist in his bunker with two guests, one of which he saved after she was in a car accident.  Soon, the questions arise:  Is the world really ending?  Did this man really save anyone?  Is this man crazy?  Can he be trusted?  This is where the psychological thriller aspect of the movie takes off and is very enjoyable.

The movie succeeds thanks to the solid suspense and John Goodman's performance.  Goodman is a man who has proven time and again that he is a solid actor and he is excellent in this movie.  Whether you find yourself trusting him or not, there is something that keeps a level of fear in the back of your mind and that is because of Goodman being so convincing.  I also think that director Dan Trachtenberg does a good job with the movie and being this is first full length film, I am excited to see where his career goes.

The movie cost only 15 million to make and it will pass the 50 million mark this week domestically.  My hope is that Abrams decides to continue expanding the Cloverfield universe because it could be a lot of fun.

Posted by VariousCrap at 7:13 PM