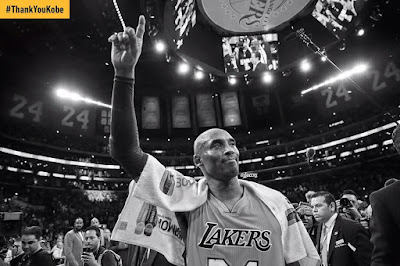 As a life long Lakers fan, you get used to special and historical moments.  That is just how it is for this franchise.  For the last 20 years we have been thrilled time and again by Kobe Bryant and last night we got to watch him in the final game of is illustrious career.  The last three years of Kobe's career have been difficult to watch as the man who was the best player in the game for years, was now battling serious injuries.  His will was as strong as ever, but his body was broken.  With their best player no longer able to play at an elite level, the team suffered.  Basically, it hasn't been as fun to watch Lakers games the past three years.  Last night was all about saying goodbye to Kobe and he decided to give us one more special moment in his final game.

Going into last nights game the general thought was, the Lakers don't care if they win, it is just about giving the fans a chance to cheer for Kobe one last time.  When the Utah Jazz took a 16 point lead, you as the fan were not upset because you were appreciating watching Kobe on the court this last time.  All of a sudden, the Lakers, led by Kobe, started to close the gap and you started to get the feeling that the fourth quarter was going to be magical.  In that fourth quarter we saw Kobe do something he hadn't really done in the last three years, he got in the Black Mamba zone.  For 17 of Kobe's 20 years in the NBA, we Lakers fans saw him get in that zone many times, but it has been a while since we saw it.  Last night, the Black Mamba carried his team to a come from behind victory and was able to recapture the greatness of his younger years.  He was slower on the court and breathing heavier than we saw him in his prime, but it was still beautiful to watch.  Kobe took his warrior mentality, played through the pain and showed us he still knew how to win.

Kobe ended his career on his terms.  In front of his home crowd, 60 points scored, with a victory and by overshadowing the Golden State Warriors record breaking victory.  That is just so Kobe.