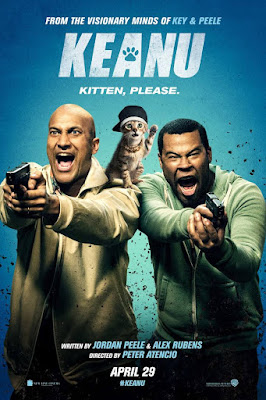 This weekend is the calm before the summer movie season storm; therefore no potential box-office hits are being released.  This means that The Jungle Book will dominate the box-office for a third weekend in a row pulling in around 40 million.

The first major release is Keanu which is a comedy that looks like it could be pretty funny, but it won't do very well in theaters.  The movie is getting good reviews with a 75% fresh rating at Rotten Tomatoes.  Look for Keanu to open around 10-12 million this weekend.

The second release this weekend is the ensemble film Mother's Day.  You'd think a movie that stars Julia Roberts, Kate Hudson, Jennifer Aniston and Jason Sudeikis would be a hit, but not when it looks like a big steaming pile of shit.  The movie is getting horrible reviews with a 7% fresh rating at Rotten Tomatoes which is extremely low.  Look for the movie to pull in around 8-10 million and then disappear forever.

The third release this weekend is the animated Ratchet & Clank which is based on a popular video game series.  When I took my kids to see Zootopia this movie was one of trailers that were shown before the movie.  I remember being amazed that the trailer did not generate any laughs from the kids in the theater.  That is how bad this movie looks.  The movie is pulling in a poor 22% fresh rating at Rotten Tomatoes, so that proves the movie is as bad as its trailer.  I think the movie will pull in around 8-10 million this weekend and then it will join Mother's Day in the galaxy of forgotten movies.

This weekend there is a one movie opening that I want to see called Green Room.  The movie is in limited release and the buzz/reviews for the movie have been very good.  It is a thriller/horror film and it is currently at 88% fresh at Rotten Tomatoes.  I'll probably have to wait until the movie hits DVD to see it, but it will be worth the wait.

Finally, next week I will be posting a huge blog that will breakdown the summer movie releases with predictions.  It will be epic.  It may even, break the internet like a Kardashian ass.

Posted by VariousCrap at 1:57 PM