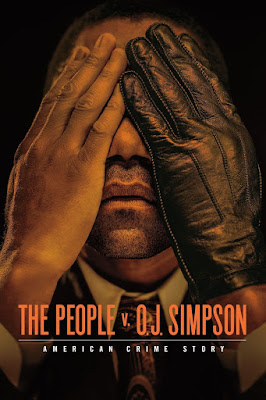 Last night was the finale of FX's The People v OJ Simpson and it was awesome.  As a person who lived through the "Trial of the Century" and paid attention to it, what this series did was make me realize how much I didn't know about it.  There were so many elements to this trial that were incredible, if this had just been a TV show that wasn't based on true events, people would say the story was too unbelievable to believe.

The show starts the night of Nicole and Ron's death and takes us all the way through OJ's release from prison.  What makes the show so good is it focuses on the legal aspect of the story.  On one side, you have the prosecution.  Their strength they had was all the evidence a lawyer could possibly need to convict a suspect.  Their weakness was overconfidence in their case, not doing due diligence on their witnesses (Mark Fuhrman) and having a prosecutor who had no understanding of the feelings of inner-city African Americans.  On the other side, you have the defense, "The Dream Team."  Their strength was to ignore all the facts of the case and to create a story so sensational, that the jury will focus more on that story than the facts against Simpson.  The lead prosecutor, Johnnie Cochran, understood the emotional feelings of the African American jurors and their opinions on the LAPD and he manipulated those emotions with his story beautifully.  Their weakness was keeping fellow defense lawyer Robert Shapiro from being a total idiot.  Honestly, the entire trial was so bizarre, it is still hard to believe it actually happened.

As for the show, it was excellent.  Besides the incredible story it is telling, the acting is fabulous.  The strong performances were lead by Sarah Paulson as Marcia Clark, Courtney B. Vance as Johnnie Cochran and of course, Cuba Gooding Jr. as OJ Simpson.  The lone performance that I did have difficulty with was David Schwimmer as Robert Kardashian.  Not because he didn't give it his all, but because it really felt like Ross from Friends was the one doing the performance.  It was just weird.  Of course, that is a very small complaint in an otherwise fantastic show.  I highly recommend you checking this show out on On Demand or Netflix/Amazon/Hulu/etc.  I just wish there could have been more episodes, because 10 was just not enough.

Posted by VariousCrap at 8:45 AM