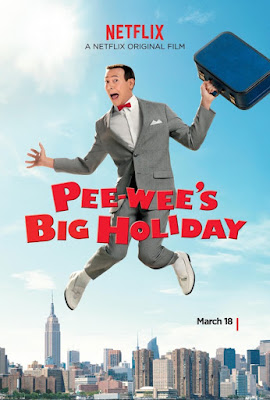 If you were a kid in the 80's, one of the things you loved was Pee-Wee Herman.  In 1985 Pee-Wee starred in his own movie - the 80's classic Pee-Wee's Big Adventure.  This was a near perfect comedy with Herman making you laugh scene after scene.  In 1988 Pee-Wee returned to the big screen with Big Top Pee-Wee which had some laughs here and there, but overall, it was a disappointment.

As the Herman story goes, actor Paul Reubens fell out of the public eye after getting caught playing with his pee-wee in an adult theater and it wasn't until 2010 that Pee-Wee came back in a big way.  Appearances on TV led to his own Broadway show which led to a HBO special and an entire new generation of kids being introduced to Pee-Wee.  Also helping was that Pee-Wee's Big Adventure was on Netflix for some people to watch for the first time and others to rediscover.  I guess this is why it only makes sense for Netflix to release Herman's new movie, Pee-Wee's Big Holiday.

In my opinion, for a Pee-Wee movie to work you need to have characters who are not realistic, Pee-Wee falling into situations that are over-the-top and a ton of silly jokes.  Big Holiday achieves in all three of these categories.  Now, this isn't Big Adventure good, but it is still pretty dang good.  Paul Reubens is just amazing as Pee-Wee.  It blows my mind that Reubens is 63 years old and still looks as young as he does.  It is crazy to think about, but Pee-Wee barely looks like he aged since the last movie.  He is still the innocent man child we all remember and love.

The plot is pretty simple.  Pee-Wee leaves his hometown for the first time in his life to go to Joe Manganiello's birthday party in New York and he has one adventure after another on the way there.  Each situation Pee-Wee finds himself in is predictable, but still so enjoyable to watch.  Manganiello is great in this movie.  He is playing himself in a way that is hilarious and you really end up enjoying the friendship that develops between him and Herman.

When it is all said and done, is the movie silly and ridiculous?  Yes, and I wouldn't want it any other way.  The movie came out in March on Netflix and it can still be watched that way; so go watch it so we can get another Pee-Wee movie!!!