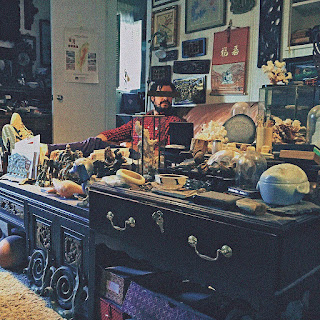 So who is Sam Means you ask?  Sam was a member of the band The Format who wrote the vast the music for the band.  The Format's album, Dog Problems, is one of my Top 20 favorite albums of all time.  After The Format broke up in 2008, the lead singer Nate Ruess went on to form the multi-platinum band Fun while Sam decided to spend time starting a family.  Over the years Means has released a couple EP's here and there and he did a music score to an indie movie, but he's kept us waiting for that full length album.

10 Songs feels like a natural progression for Means as the album follows the same pop majesty of his Format days while fitting his vocal abilities.  With The Format, the songs had much louder choruses due to Ruess's vocal ability which Means doesn't have; so Means writes these songs a bit more mellow which works for vocals perfectly.  As for the songs themselves, overall, they are very good.  While the album is a bit more mellow than I would have preferred, the songs are well crafted pop songs.  Means brought in the producer of Dog Problems to produce this album and I really enjoyed the way this album sounds and feels.  In a time where the latest Beyonce album has over 60 different writers, it is nice to know there are artists like Means who write all their songs themselves.  I also like that Means decided to stay indie and put this album out himself.  It just fits with his vibe.  Speaking of sticking with his vibe, check out the music video he and his six year old did for my favorite song on the album, Other Side of You: