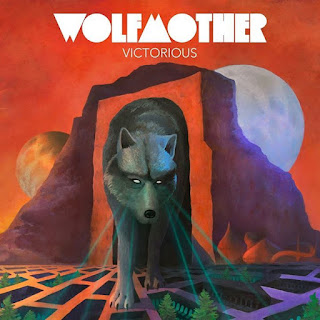 It doesn't seem that long ago that I first read about a band from Australia that was causing a lot of buzz.  That was back in 2005 and by 2006 their debut album was a world-wide hit.  Wolfmother is a band I connected to immediately because I loved that their style was bringing back the 70's classic rock sound.  Wolfmother has had several line-ups over the years, but in the end, the band is lead singer/songwriter Andrew Stockdale's band.  He writes all of their songs and plays multiple instruments on their albums.

Victorious is Wolfmother's fourth album and it is great.  This is the second album in a row that features the current line-up Stockdale has put together and it feels like they really jelled in the studio.  The first album for this line-up was 2014's New Crown and while I enjoyed that album, it felt like a step down for them.  This album is a solid return to form and I think it is because the band is much more fluid than they were for New Crown.

The album is filled with great rock songs like The Simple Life, Eye of the Beholder and the title track.  The album also features a more mellow song called Pretty Peggy that is one of my favorite songs they have ever done.  In fact, if I was Wolfmother's manager, I would release Pretty Peggy as a single immediately, because that song has "hit" written all over it.

On a side note, I have seen Wolfmother live twice and they are great live.  I highly recommend checking them out and getting this album.