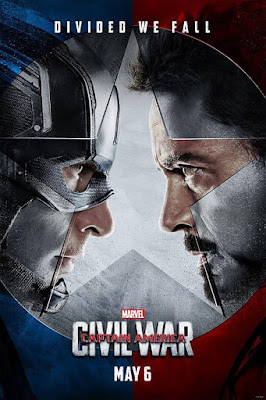 The summer movie season officially starts this weekend with Captain America: Civil War.  There is no doubt that Civil War is going to begin the summer with a bang, but how big of a bang is the real question.  My early thoughts on this weekend's numbers was that the latest Marvel film would come in around 200-205 million.  If the movie pulled in 200+ million, that would make it only the fourth movie to ever crack the 200 million mark its opening weekend.  All tracking information had me confident in a 200+ million opening, but after its Thursday night preview numbers, it looks like 200 million will not be happening.  The Thursday night numbers are in and the movie pulled in a huge 25 million which is awesome, but that is roughly 10% less than what Batman v Superman and Avengers: Age of Ultron pulled in.  BvS opened to 166 million and Avengers 2 opened to 191 million, so expect the Captain to open somewhere between those two.  Mr. America will open more than BvS due to the great reviews (92% fresh at Rotten Tomatoes), but it won't make-up that 10% to catch the second Avengers movie.  Look for Captain America: Civil War to pull in a mighty 180-185 million this weekend which would be the fifth biggest opening of all time.

So what about three weekend champ The Jungle Book?  Obviously the newest Marvel movie will hurt it, but it will still do just fine as it should pull in 25-30 million which would make it the second biggest film of the weekend.