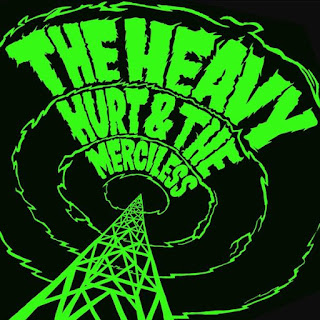 One of my favorite bands I've gotten into in the last 10 years or so is England's The Heavy.  The Heavy got on my radar with their song How You Like Me Now when it was used in a Kia car commercial.  I loved the song so much I had to find out who did it and after I did, I bought their album and I have been hooked ever since.  What I love about this band is their throwback style which mixes rock, funk and soul.

This past April The Heavy put out their fourth album Hurt & the Merciless and it may be my favorite album they have ever done.  Each album is great, but this one has so much groove to it, it can make even a white boy like me want to dance.  The album explodes with Since You Been Gone which features killer drums and horns.  Songs like What Happened to the Love,  The Apology and Turn Up continue that great mix of rock, funk and soul that makes this band so unique in today's music climate.  I can honestly say that this album has no filler as far as I'm concerned.  I even like the more mellow tunes like Nobody's Hero and Goodbye Baby.

I've said this before and I'll say it again, I just don't understand why this band isn't bigger than they are.  They have all the elements a band needs to achieve huge success and they should be on everyone's radar.