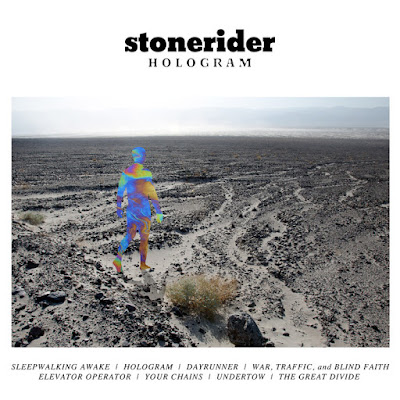 I discovered Stonerider back when they released their debut album in 2008 which impressed me with their 70's style rock which was reminiscent of classic Aerosmith, Nazareth and bands like that.  I'm not sure how I originally discovered them, but they fit right into the style of rock I always have enjoyed.  To be honest, after that, I sort of lost track of the band.  It wasn't until a couple months ago that I read they were coming out with a new album that I was reminded of their debut album.  I then discovered they released their sophmore album in 2012 and their 2016 release was their third album.  I went ahead and got the second and third albums and I've been listening to them pretty much on a weekly basis since then.  This is especially true with the new album Hologram, which is just excellent.

While the debut album reminded me of classic Aerosmith, with this new album they went in a different 70's style direction.  If classic Deep Purple and classic Pink Floyd had a baby, Hologram would be that baby.  The album has a sophistication to it that their other albums didn't have.  The music and the arrangements are more developed, the lyrics are smarter and there are some great melodies on this disc.  The best example of this is the epic 11 minute song Your Chains which just blows me away.  That song, like so many on this album, have so many elements to them it is truly an experience to listen to it.  Now, before you start thinking this is some pretentious prog rock album, the album also features three minutes songs like Dayrunner which sounds like it is should already be played on classic rock stations.  There is no doubt this will be one of my Top 10 albums of the year.

You can get this album digitally on Amazon, iTunes, etc. and you can get it on CD or on vinyl from the band's website.

Posted by VariousCrap at 8:15 AM