Music Review: SIXX: AM - Prayers for the Damned Volume One 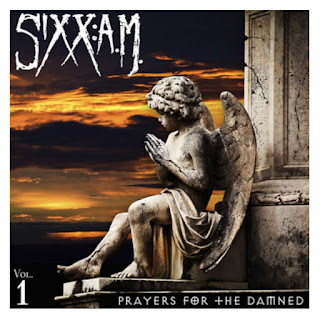 Back in 2007, Nikki Sixx of Motley Crue decided to form a new band to support his first book and I was immediately intrigued.  Sixx is one of my favorite songwriters from the 80's and I liked the idea of him creating music with a new band.  The debut SIXX: AM album became a hit and when Nikki wasn't working with the Crue, SIXX: AM got all his attention.  By 2015, they had released three albums and I loved each one of them.

Prayers for the Damned Volume One is SIXX: AM's fourth album and it is the best album they have released so far.  I'm not sure if these guys were eating their spinach or what while writing the album, but they simply nailed it.  I read that SIXX: AM had decided that they wanted to write more songs with anthem choruses and they definitely achieved that.  The album is a mix of dark powerful lyrics, atmospheric riffs and choruses that get stuck in your head.  What really shines on this album is lead singer James Michael's vocals which are simply fantastic.

Songs like Rise, You Have Come to the Right Place and Prayers of the Damned all have huge hit potential.  In fact, Rise already hit #3 on the Billboard Mainstream Rock charts.  Songs like When We Were Gods and Belly of the Beast may not have hit potential, but they are incredible songs that really stand out on an album where every song is great.  I really hope I get the chance to see this band live sometime on their current tour.

Posted by VariousCrap at 5:03 PM