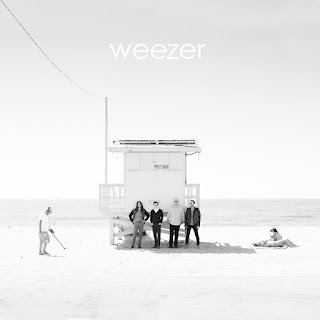 It may be hard to believe, but Weezer's latest album, known as The White Album, is their tenth studio album.  When Weezer started back in the 90's they were mostly referred to as an alt rock band and over the years they have morphed into more of a power-pop band.  Of course, when listening to their early stuff, you can hear tons of power-pop influence in their songs, but it is even more prevalent now.

I read that with this album Rivers Cuomo was attempting to make an album that had a happy "summer time" feel to it.  I think this means Weezer was trying to make an album that could be the background soundtrack during the free spirit of the summer season.  I would imagine that while Weezer was recording this album, they could picture people having it on while they are out at the beach, by the pool, in a park or wherever the summer may take you.  Overall, I think that Weezer accomplished their goal as this is a fun album that is filled with catchy hooks, melodies and lyrics.  Where I think the band really succeeded is that they were able to create this fun album and still have hints of classic Weezer.

While the album is filled with good songs, the songs I really connected to are the power-pop driven Wind in our Sail, (Girl We Got A) Good Thing and California Kids.  I have enjoyed Weezer's first ten album and I hope they release ten more.