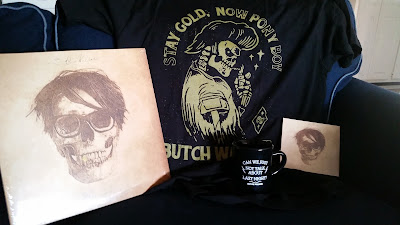 If you've paid attention at all to things I've posted over the years you'd already know my favorite singer/songwriter is Butch Walker.  While most people don't know who he is by name, chances are that you know his work.  He is one of the biggest producers and songwriters in the music business today.  He has written and produced for artists such as Pink to Weezer to Fall Out Boy to Panic! at the Disco to Taylor Swift to Keith Urban and more.  When he is not writing and/or producing for other artists, he puts out his own stuff and tours the country like a madman.

What I love about Butch Walker is that every solo album sounds different than the last.  While his music is all rock based, he changes things up every album based on how he is feeling at the time.  Last year, his album Afraid of Ghosts was #8 on my Top 10 Albums of 2015.  That album was a more mellow and somber album that dealt with his reflections after the death of his father.  It was a beautiful album that felt like an emotional hit to the gut.  With Stay Gold, Butch took inspiration from 80's era Bruce Springsteen and Tom Petty, so the mood of this album is much more upbeat.

Stay Gold has a nice mix of songs which includes great rock tunes like the title track, East Coast Girl and Irish Exit.  The song that I really love is the mellow, Descending, which is a duet with Ashley Monroe and it is just amazing.  Other songs I'm really liking are Wilder in the Heart, Mexican Coke and Ludlow Expectations.  I'll be seeing Butch perform twice this month, and I can't wait to hear these new songs live.

Posted by VariousCrap at 3:42 PM