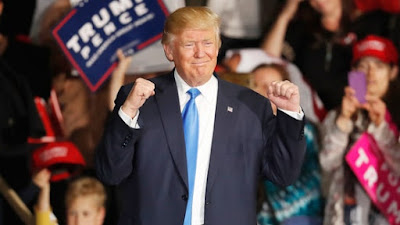 So after taking some time to process the surprising Trump victory last night and watching the response from people today, I do have some thoughts and questions to share.

1. I don't like the "Not My President" thing people are doing.  If Republicans had to suck it up and accept President Obama, why shouldn't Democrats with Trump?  It just seems stupid to me.  Whether you like him or not, he is your President for the next four years.

3. The second major mistake is that Dems forgot about white people.  Dems have been working so hard to build support among minority voters over the years, they have completely ignored white voters.  This is especially true with the white working class.  FiveThirtyEight's Nate Silver said that Trumps gains vs Romney in 2012 was among the white working class and that was the difference in this election.  While the white population continues to decline, it seems to me that Dems have decided to focus more on other groups of voters and they ignored the white vote.  This cost them dearly in this election because there are still a ton of white people in the country and they are pissed because they feel "their country" is being taken away from them.  They showed up big time in this election and they did so for Trump.

5. How are Trump supporters going to respond when Trump doesn't build the wall at the Mexican border?  Mexico has already said they are not paying for it and the United States can't afford to do it.  The Washington Post estimated that the wall would cost up to 25 billion dollars to build.  The US can't afford that, Mexico can't afford it and won't do it; so how will his supporters react when they realize Trump lied about that too?

In the end, last night was really entertaining, even if the result made me feel sick to my stomach.  I did giggle at all the experts who were just dumbfounded by what they were witnessing.  The people at CNN all looked like a deer caught in the headlights as the results started to turn Trumps way.  I think what I will take away most from this election is the amount of people in my life that I now have little to no respect for.  I saw so many of them turn on their own beliefs and principles in this election that I am embarrassed for them.  When the (R) next to a candidates name means more than a persons own beliefs, religion or whatever, you realize those people had very little character in the first place.