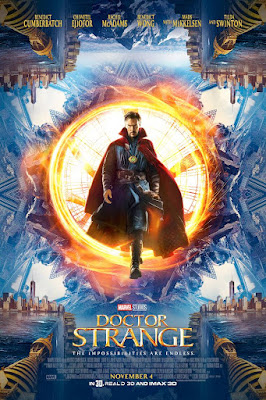 Marvel is back again with Doctor Strange.  The movie is pulling in a very solid 90% fresh rating at Rotten Tomatoes, so people are going to love this movie, but don't expect an opening similar to Marvel's biggest hits.  The Doctor Strange character isn't as big as some of their other characters, so that will mean this movie pulls in less than 100 million this weekend.  I've seen predictions anywhere from 70-90 million, so I'll go in the middle.  Look for Doctor Strange to pull in around 80 million.

This past summer The Angry Birds Movie came out and it seemed like the movie was coming out too far past the Angry Bird peak.  The movie opened to 38 million and ended it's run with 107 million domestically.  This weekend's Trolls also feels like it is coming out too far past the Trolls popularity peak, but unlike Angry Birds, Trolls is getting good reviews.  A check over at Rotten Tomatoes show the movie is pulling in a solid 75% fresh rating, so that should help Trolls do a bit better than Angry Birds did.  Look for Trolls to pull in around 40 million this weekend.

The final film of the weekend is the Mel Gibson directed, Hacksaw Ridge.  Ridge is the first movie Gibson has directed in 10 years and it is pulling in a very good 87% fresh rating at Rotten Tomatoes.  This movie is being called a potential Oscar contender, but it is a movie that will need long legs at the box-office to be a hit because it will have a so-so opening.  Look for Hacksaw Ridge to pull in around 14 million this weekend.

Posted by VariousCrap at 1:55 PM