Music Review: The Cadillac Three - Bury Me In My Boots 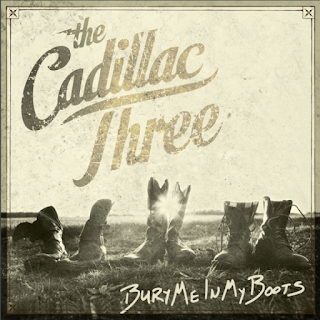 I'll be the first to admit that I don't like country music.  I just don't connect with it musically or lyrically, but The Cadillac Three are one of the few exceptions to this rule.  For a little history in how I even discovered this band, we go back to 2010 and my favorite album of that year.  My favorite album of 2010 was the self-titled debut from the band American Bang.  This album was produced by Bob Rock (Metallica, Motley Crue) and I really like their Kings of Leon style of southern rock.  Unfortunately, the album didn't find success and the band called it a day.  Soon after that, three of the guys from American Bang decided to start what I call a country grunge rock band called The Cadillac Three.  I gave their 2012 debut a chance and I really liked it.  Their 2016 release, Bury Me in My Boots, continues where the debut left off with some badass country grunge rock.

Bury Me in My Boots consists of some great tunes with a lot of groove.  My wife, who likes country music, says that this band sounds similar to a lot of country rock artists, but when she played me those artists, I don't hear the similarities.  The Cadillac Three have a unique style to their songs that puts them on another level in my opinion.  They are also really sharp with their lyrics and I really like the way the lead vocalist sings the songs.  Songs that are really worth checking out include The South, Party Like You and Drunk Like You.  When all is said and done, my biggest compliment to this band is that they can get a guy who doesn't like country music to listen to their albums over and over again.

Posted by VariousCrap at 8:26 AM