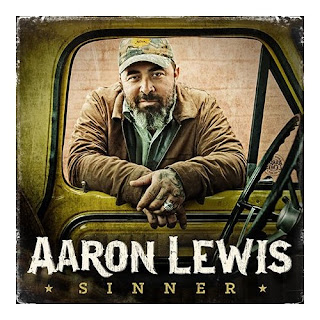 I have mentioned on here before that I don't really like country music as it is just not my thing, but every once in a while, something connects with me.   Aaron Lewis is the lead singer of one of my favorite nu-metal bands, Staind.  One of my favorite things about Staind has always been Lewis' vocals, so when he came out with a solo EP back in 2011, I was pretty excited.  Imagine my surprise when I heard the album the first time and it was a country album.  A strange thing happened though and I actually liked it, well, most of it.

Sinner is Lewis' third solo release and is his second full length album.  When listening to the album, there is no sign of the Staind days at all as this is a real country album.  I have no idea what country purists would say, but to this country music novice, this sounds like some real country music.  In fact, I recently listened to country legends Alabama to get a feel for real country music and I think Lewis' album fits.  Lyrically, the album is like most country songs I've heard: America, whiskey, trucks and sticking to your grandparents core values.  Now, for me, those types of lyrics get old pretty quick, but with Aaron Lewis singing it, I like most of it.

Some of the songs that stand out on the record for me are Sinner (featuring Willie Nelson), Northern Redneck and That Ain't Country.  While the vast majority of songs on this album are all good songs, one of the issues I have with country music in general, is an issue here too.  That issue is I really don't care for country music ballads and this album has too many of them in my opinion.  Except for the song Mama, I get bored with them upon repeat listens.  I'd really prefer Lewis putting more upbeat songs on the next album because I really like those.  Of course, that is just me and like I said, most of the songs on this album are good, so don't let that deter you if you dig Aaron Lewis or country music.

Posted by VariousCrap at 8:24 AM