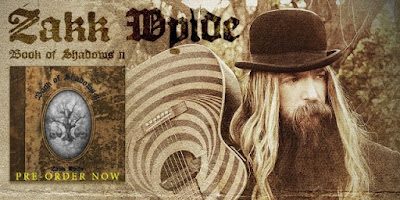 Zakk Wylde is one of my favorite guitarists.  He got his start as a teenager playing guitar for Ozzy Osbourne and he helped Ozzy achieve some of his biggest commercial success as a solo artist.  His writing had a huge influence on the Ozzy classic, No More Tears which was a huge album.  When he hasn't been working Ozzy, he has had his own projects including Pride and Glory, Black Label Society and his excellent solo album, Book of Shadows.

Book of Shadows came out in 1996 and is pretty much an all acoustic album that has hit legendary status among Zakk Wylde, hard rock and metal fans.  There is no doubt in my mind that the album features some of best writing and singing of his career.  20 years after that release, Zakk finally gave the fans Book of Shadows II which continues the original's tone and style.

I was pretty excited about this album after Wylde announced he was going to release it, but like with most sequels that come out decades after its predecessor, it failed to live up to expectations.  While one could argue that having high expectations is unfair to the new album, but upon repeat listens, I just don't find the songs to be as good overall.  Book of Shadows II starts off strong with its first five songs all being good.  After that, the songs become...well...boring.  I wouldn't say any of the songs are bad, they are just dull.  The album does end on a stronger note with its last couple songs, so that helps it a bit.  Songs on the album I really like include Autumn Changes, Lay Me Down and The King.  While I appreciate Zakk trying to do duplicate Book of Shadows, at this point in his career, I think it makes more sense for him to continue to put out music with his band Black Label Society who still kick kick ass.

Posted by VariousCrap at 8:23 AM