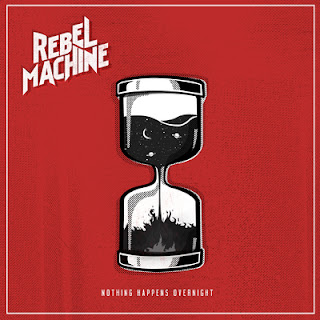 You gotta love a band that knows their music is worth getting out to the masses whether they have a record deal or not.  Brazil's Rebel Machine is such a band.  Nothing Happens Overnight is the self-released debut album from Rebel Machine and it is a solid start to their career.  The album came out back in 2016 and it just hit my radar several weeks ago.

Stylistically, Nothing Happens Overnight is your classic 'balls to wall' style of hard rock album.  They are a guitar riff band that reminded me of current bands like Australia's Airbourne and Great Britain's The Treatment.  Each song on this album is a rocker with solid vocals and powerful choruses.  For me, this album took me several listens to really get into, but once I did, I really dug it.  Songs I am really liking include Don't Tell Me I'm Wrong, Down The Road and Goodbye Honey.  But the song that I am really loving is Life Is Fuckin' Good which is my jam right now.  My only complaint with this album is it is only 8 songs and it left me wanting more, but that is a small complaint to have.  I don't know what the rock music scene is like down in Brazil, but these guys should be huge down there and I'd love to see a rock music based label like Roadrunner, Century Media or Megaforce sign them to get them the audience they deserve.

Posted by VariousCrap at 11:31 AM No comments: